A Glitch in the System

When something takes control of a ship, the Killjoys must confront their own dark secrets.

Onboard Lucy, Dutch and John are searching the asteroid belt around Arkyn for a derelict spaceship. They have a Claim and Clear Warrant for the vessel, which allows them to salvage and keep anything that is onboard the ship. While they search the asteroids D'av is in his bunk suffering from combat nightmares, and he receives a call from Pawter Simms, who's trying to diagnose and treat him.

Dutch and John find the abandoned ship and Dutch outwits Johnny to be the first to board it. She gives the “All Clear” and the Jaqobis brothers join her onboard to search the ship for anything that can be salvaged. They split up, Dutch to search the ship, D'avin to set scuttling charges to destroy the abandoned ship, and Johnny to recover the ship’s transponder as proof of the claim for their warrant.

As they move through the ship they get the eerie feeling that they are not alone. Dutch catches a fleeting glimpse of someone and goes in pursuit of the stowaway. D'av follows a trail of blood to another stowaway in another part of the ship. Meanwhile, Lucy detects a possible contamination on the abandoned ship and begins quarantine procedures. That means pulling away and severing the connection between the ships, leaving the Killjoys onboard with no way back to Lucy.

The person Dutch is chasing shoots himself out an airlock without a spacesuit, but not before he writes “17” in blood on the door. D'av finds the person he is tracking as well, and finds out his name is Hogan, and that he and Wilson (who Dutch was chasing) were ship-pickers too, just like them, and the same thing happened to them a couple years ago. They've been stuck on the ship ever since. Hogan also says that he was an infantry man, and the two men bond over their military service. D'av takes Hogan to the infirmary while Dutch goes downstairs to find spacesuits.

John finds a video in the ship's archives, and on it he sees younger Hogan among the ship's original crew. John tells D'av on comms that Hogan's not to be trusted. Meanwhile, Dutch finds the cold corpses of what appear to be the original crew of scientists for the ship.

Hogan gets the upper hand with D'av and takes him to an interrogation room on the ship. It seems that being a freighter was a cover for the ship, it is actually a black ops military ship that used advanced technology torture methods to interrogate prisoners. D'av is infected with Nanites that alternately injure then heal him based upon his answers to the interrogation computer system’s questions. The computer asks various questions about D'avin's last military mission to establish his background, and he remembers that he killed his squad, but he can't remember why. Then the computer asks "What is your connection to Red 17?"

John and Dutch watch the videos of the interrogation, torture, and deaths of the original crew at the hands of Hogan, who also has the nanites in him. Dutch comes up with a plan to rescue D'avin: she basically lets herself get captured and implanted with the nanites. As the program begins interrogating her, Dutch blows up Hogan, and she and D'av make a run for it. In order to get back to Lucy, Dutch goes out an airlock without a suit, the nanites keeping her alive until she gets back to their ship.

The Jaqobis brothers get back to Lucy and the team manages to blow up the ship with Hogan onboard.

Back on Westerley, Pawter is examining D'av and notices that scar tissue in his brain is now gone because of the nanites, and his scans show that neuro-dampeners were implanted in his brain to block certain memories, like killing his squad.

Finally, Khlyen shows up on Lucy with another red box for Dutch, and threatens to hurt Johnny unless Dutch leaves with him. 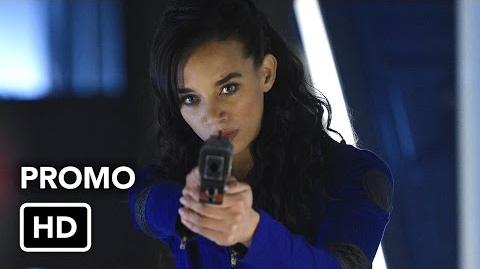