Isolated due to toxic Black Rain, John must stop a criminal operation, while a trapped D'avin and Dutch must face what happened between them.

Johnny is recovering under Pawter’s care, sitting in the Royale complaining to Pree about how D'av and Dutch have failed to rebound from the aftermath of D'avin being the subject of a Memory alteration experiment. John has taken out a warrant for Dutch and D'av to work on together, kind of like a team-building retreat.

No sooner have Dutch and D’av left than there is a Black Rain alarm in Old Town. Pree offers a safe haven in his bar, and Alvis takes advantage of the hospitality.

On Leith, Bellus has a pretty easy warrant for Dutch and D'av: transport a package. But first, she needs to square things with D'av, by which she means punching him in the gut.

In the Royale, Pawter looks like she's going into withdrawal and Pree offers to make her tea since she can't venture out into the elements to get her fix. Johnny notices that one of the folks in the bar has just had an alert sent out to them for robbing a Company Office. He also notices that a Company Security Officer in the bar got the same alert. Johnny pulls Pree, Pawter, and Alvis out of the line of fire between the officer and the gang of thieves. The gang takes over the bar, but not before the leader is shot.

Meanwhile, outside, Company prisoners are being executed by the black rain.

Pawter and Johnny start patching up the criminals' leader, but Pawter's got the Jakk shakes, so she needs Johnny to cauterize an artery.

Above Westerley, Dutch and D'av hover in Lucy above the storm. The item they are transporting seems to be messing up Lucy's navigation and control systems. Turns out, it's a message from Johnny; they're stuck in one room until they talk it out.

Since they can’t go outside, Johnny and Alvis head to the underground tunnels to retrieve medical supplies for Pawter. They manage to score some Jakk from a dealer. Alvis pays for it with a blessing. On their way back to the Royale, the two get stopped by a Company Security Squad. Johnny convinces them to not storm the bar to rescue their officer and let him handle it. Back in the bar, Pawter realizes the Jakk is dirty, but she needs it anyway and injects herself.

On Lucy, Dutch can't seem to give Johnny's lie-detector device a satisfactory answer to the question "Do you trust D'avin?" Dutch's three specialties from her childhood are killing, dancing, and marrying into royalty. D'av asks her to exercise her dancing muscles, as a trust-building exercise. They dance together until Dutch stops, the problem being that after what he did to her, normally she'd just kill D'av and move on, but she can't do that. D'av suggests that he should project his picture onto a locker and have Dutch stab it. She asks him to do the same with her standing in the way. She needs to know he can take the shot and trust himself not to hurt her. She balks at the last second because she doesn't trust him.

Pawter tells John the last time she operated high, she killed her patient. Johnny talks her through the drug effects and helps her perform the surgery. Downstairs in the bar, the criminals discover that the security officer activated his distress beacon and force him out into the black rain to die.

On Lucy, the ship is getting pulled into the storm, and the device from Johnny is malfunctioning. Dutch and D'av destroy the device and gain control of Lucy again, prepping to land in Old Town.

In Old Town, Johnny and Alvis go out into the rain to retrieve the officer. Johnny also retrieves a nail gun used to fasten the prisoners in the rain, which he uses to shoot the bad guys in the head, saving the day.

Afterward, when things have settled down in the bar and Dutch and D'av have returned, Alvis gets intel from the Company Officer about the Company's plans for some kind of big event they are planning. The Company is stockpiling weapons and supplies.

D'av pulls Johnny aside and tells him he is leaving the team, but Johnny doesn't accept it. He tells D'av he is still part of the team and to fix it. 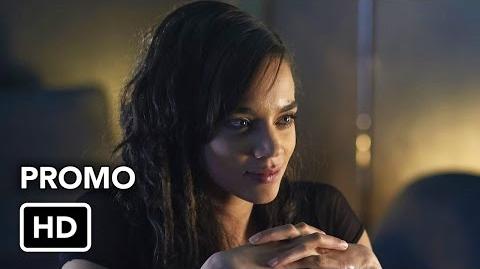