Yalena 'Yala' Yardeen AKA "Dutch" is a central character appearing in Season 1, Season 2, Season 3, Season 4, and Season 5 of Killjoys. She is portrayed by actress Hannah John-Kamen as well as Maya Lowe as a young girl and Ava Laferriere and Jordana Blake as a child.

Dutch was the leader of RAC team 25698-A[1], one of the top teams of bounty hunters in the Quad. Now, she leads the new RAC, an organization made to hunt down and find/kill the children of the villainous Lady who let her murderous alien children loose in the Quad to kill everyone and everything in their path.

Dutch is the daughter of Khlyen and Yalena Kin Rit.

Sometime before the events of the show, Aneela, feeling lonely due to being isolated for centuries, used the green plasma from her own body to visit her memories and brought a younger version of herself into the physical world. Aneela named the girl Yalena, after their mother. When Khlyen discovered this, he forcibly removed his daughters' memories of each other to protect them from the Lady. To hide her true origins from her, Khlyen approached Yalena and lied that he had been sent by her father, the head of the House of Yardeen, to tutor her. He also told her that her once wealthy family owned an entire moon at the edge of the J, but had lost everything, and that she was chosen to join a harem on the planet that the family's moon orbited. In the harem, Yalena learned the etiquette and skills needed to be the bride of a prince, which was the only way out of the harem.[2] She was also trained by Khlyen as an assassin and covert operative, learning unarmed combat and weapon skills as well as intelligence and interrogation techniques. Khlyen emotionally scarred her by forcing her to kill people in various ways, often without telling her who she was killing or why.

Eventually, she was to be married to a prince, as she was raised to do. On the day of her wedding, Khlyen revealed to her that the sitara he gave to her was an instrument of murder, and that she was to kill her husband. She never got the chance to sing to the prince, as Khlyen killed him before she could.[3][4] This prompted her to take Lucy and flee. She met John Jaqobis when he attempted to steal Lucy, and they became friends and eventually joined the RAC together. Around this time, Yalena began calling herself Dutch, a shortened form of a nickname John had given to her when they first became Reclamation Agents. Unbeknownst to her, Khlyen followed her to the Quad and remained hidden, biding his time until she proved she was ready to kill again.

When John realizes that a Level 5 Warrant has been taken out on his brother D'avin, he accepts the warrant in Dutch's name and travels to the Slaver Ship Arcturus to get him. Discovering this, Dutch helps Johnny in order to keep him from being disciplined by the RAC.[5] D'avin helps Dutch and Johnny complete a Hostage Exchange Warrant to retrieve the daughter of a mayor from a gang lord in Sugar Point. After this, D'avin becomes a Killjoy and a member of the team.[6] Together, the team continued to take warrants across the Quad, including rescuing a young woman who was pregnant with the heir to Land Lahani of The Nine[7] and retrieving Vincent Sh'ao, a migrant worker and Jakk grower, from Leith before his work visa expired.[8]

Khlyen reappears in Dutch's life, and despite her efforts to resist, she is pulled into a large scale conspiracy that encompasses the Quad. The political machinations of The Company, The Nine, and the RAC[9] make it hard for Dutch to maintain her neutrality as a Killjoy and not take a stand with the Westerley resistance. When Khlyen captures D'avin and subjects him to the Red 17 program on Arkyn, Dutch vows that she and Johnny will continue to search for D'avin until they find and rescue him.[10] They are able to rescue D'avin from Arkyn after finding a way to defeat the defensive shield technology that surrounded the moon.[11]

Dutch is bold, humorous, and fun-loving on the surface, but underneath the banter and protectiveness is pain, maturity and a deep solemnity. She can act the dangerous flirt, and has a gift for earning people's trust. She respects others regardless of class. However, she always withholds a part of herself from all but her closest family.

Dutch can also put on a upper-class air with ease, with the etiquette and skills to maneuver the same social circles as the Nine. She learned such traits in the harem she lived in as a child where she was trained to become a queen. Khlyen also trained her as an assassin and covert operative, so she has unarmed combat and weapon skills as well as intelligence and knowledge of tactics and interrogation. He also taught her how to charm through music and how to correctly use, identify and cure various types of poison.

Dutch is medium height, slender and athletic. She has long, dark brown hair which is often worn loose. She has light green eyes that are framed by long, dark lashes and highlighted by makeup when she is on the job.

Johnny and Dutch's relationship is very sibling-like. They first meet when John attempted to take her ship, Lucy, and Dutch threatened to shoot him in the crotch. There's a bit of animosity from John when he finds out Dutch slept with his brother, D'avin.

There is a seemingly instant attraction between the two on first meeting.[12] It takes a while for them to share a kiss (twice) before sleeping together.[13] John finds out about this by following a trail of clothing leading to D'avin's bedroom. In Season 5 the two start officially dating.

Khlyen fit into the role of Dutch's father when she was young. He trained her and taught her how to kill, which eventually lead her to becoming a Killjoy. Their relationship is incredibly strained.

Dutch and Alvis have a long relationship together and have at times been lovers.

Dutch is identical to Khlyen's daughter Aneela. Aneela, a leader of the Hullen, is acutely aware of Dutch, having created her through her own Green Plasma. On discovering this, Khlyen removed the memories of the birth from Aneela to protect her from The Lady, and never told Dutch or Aneela how Dutch came to exist. 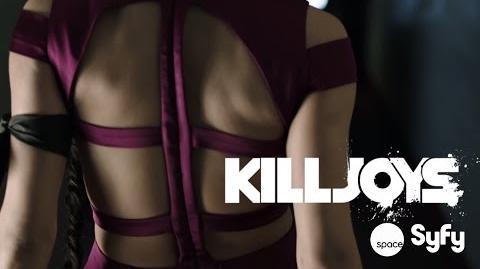 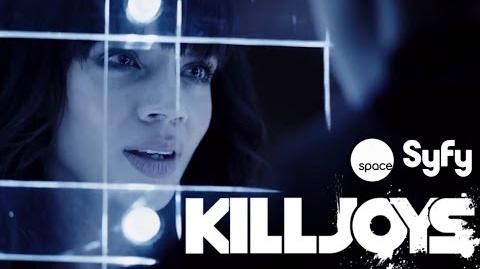 Killjoys - Dutch Always Gets Her Warrant