Dutch and John turn the tables on Khlyen, and discover the shocking truth behind his presence; Dutch wonders if she was ever free.

In Old Town, D'avin is working whatever warrant he can get now that he's off the team and no longer living aboard Lucy. Meanwhile, he catches Alvis with some contraband weapons and they have a little disagreement about covert warfare and the upcoming rebellion in Old Town. Later, in The Royale, Pree exposits the rumor that the Nine are threatening to renege on the Seventh Generation Accord and not allow Westerlyns to immigrate to Leith. Alvis joins D'av in the bar as he wants to make sure he will keep his mouth shut about the weapons he saw.

On Lucy, Johnny tells Dutch he has a plan to help her find Khlyen. He introduces her to Carleen, his tech friend from Utopia, who has been tinkering with the Neural Link. In order to find Khlyen, Dutch needs to hook herself up with the neural link again. Her consciousness gets projected into deep space, where she can track him. Dutch finds Khlyen, telling Johnny that he is close, but Carleen, monitoring Dutch's bio-readouts, says her vitals are risky. Dutch sees Khlyen and the numbers "71" on the walls. She begins to seizure, so Johnny pulls her out. Dutch found Khlyen through the link: he's on the RAC Cruiser.

Dutch and Johnny realize they need to do a covert op into the RAC and will need D'av too. Dutch isn't sure she can kill Khlyen, but more importantly, she wants answers. D'avin has a bright idea to tell the RAC that they've come to dissolve their team. But Turin doesn't quite buy it, he suspects they're up to something. D'av confesses his attempt to kill Dutch in order to get Turin to believe them, though this might get his Killjoy status revoked altogether. Turin agrees and dissolves the team.

As they leave Turin, D'av uses an electromagnetic pulse grenade he got from Alvis' weapons cache to knock out power, locks, and comm links in the RAC Cruiser. D'av sends Dutch and Johnny after Khlyen while he remains back with Turin. Dutch and Johnny split up and begin to make their way through the levels of the cruiser.

Meanwhile, Turin starts leaning on D'av for information about Dutch. He wants to know why she appears to have been protected at high levels and why is her record is marked for Red 17.

Dutch finds Khlyen, and after a short fight pulls a syringe full of poison and places it against her own neck. She realized that she is Khlyen's only weakness. He says he made her a weapon instead of a victim, which isn't a good enough answer for Dutch, so she injects herself.

Johnny finds a RAC supercomputer, filled with Green Plasma. It's humming and rippling with energy and he's able to operate it by dipping his hands in it. He downloads all the files on Khlyen, then he takes some of the plasma with him, some for Carleen and some for him.

Dutch, the poison sinking in, has so many questions. Khlyen tells her he re-entered her life when she took that Level 5 kill warrant because it told him she was finally ready (actually it was Johnny who took it on her behalf, so he could go save D'av). Dutch finally asks the big question: why her? Why did he pick her to train? They're interrupted by a RAC guard though, who Khlyen kills. Dutch takes advantage of the guard's interruption to show that she didn't poison herself after all. She gets the jump on Khlyen, but she wants her answer. He tells her to take the shot, but she runs instead.

The Killjoys escape to Lucy but she can't fly away while the RAC is on lockdown. Dutch makes it to the ship in time to override the locks on Lucy. She tells the boys to leave her behind. John won't do it, but Dutch (and Lucy) are making the calls.

Dutch gives herself up to Turin, but he shoots her in the leg. He wants to use her as bait to lure out her benefactor. Unfortunately for Turin, he does lure out Khlyen, who sticks a knife through his chest. Khlyen, with a father's concern, carries Dutch away. He tells her that he needs her to live and that he is Level 6.

Back in Old Town, Alvis is arrested by Hills Oonan, for orchestrating the Leith Bazaar Massacre. The Company security squad beats him, right in front of the Old Town people.

Dutch returns to the boys, limping on her shot-up leg. She's lost a lot of blood. As she tells D'av about what Khlyen told her, D'av says that Level 6 Killjoys are a myth. But are they? 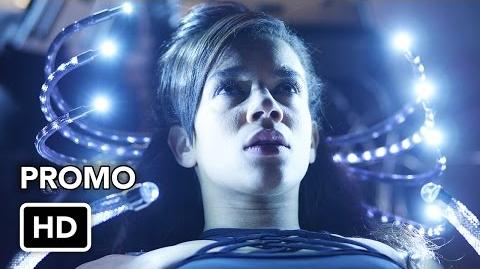