Tensions boil over when the Company arrests a friend; peace in the Quad hangs in the balance; the Killjoys must choose a side.

Alvis has been arrested for allegedly planning the Leith Bazaar Massacre, and Dutch says they owe it to him to help, even if the Jaqobis brothers are more reluctant. Dutch needs Johnny to have Carleen decrypt Khlyen's files so they can figure out how to combat Level 6.

The Company broadcasts Alvis' confession, which Dutch and Johnny assume must've been coerced, but all hell is breaking loose in Old Town. Curfew goes into effect. Dutch thinks what's happening to Alvis and what Khlyen said about trouble coming to the Quad are connected. Bottom line: they have to save Alvis.

The Johnny and D'avin head to the post-shootout Leith Bazaar and find Bellus thankfully unharmed. They ask her what she's heard about Level 6, but she's only heard tall tales; "gene-splicing, reanimation, crazy stuff," but no one has proof.

Dutch convinces Hills to let her visit Alvis in jail. Dutch to help him save Westerley by getting the entry codes for the survival bunkers under Old Town.

On Utopia, Carleen begins decrypting Khlyen's files. She's getting really into it, too … until Khlyen surprises her. He offers to make her death painless if she gives him what was taken: the liquid that Johnny stole. Once he has what he was looking for he slashes her throat and leaves her to bleed out on the floor.

In Old Town, Dutch, Johnny, and D'avin go undercover as monks into the underground tunnels. They ask the Rat King for the bunker codes for Alvis, and are asked to prove their faith. Johnny surprises everyone by knowing the words to a blessing. He's not a true believer, but the Rat King isn't so sure.

As Westerley descends into chaos upon the news that the Nine are going to vote to rescind their promise of Leith land to seventh-generation Westerlyns, Delle Seyah Kendry calls in Dutch's debt to her and requests her presence. Before leaving for Qresh, Pawter tells Johnny to look for Seyah Simms — Pawter's mother, who isn't fond of her — and hand her a message. Yes, Pawter is a "pretty, pretty princess."

Delle Seyah receives Dutch and Johnny with a mixed reaction. She clearly has some kind of chemistry happening with Dutch. She wants Dutch to be her security with the contentious vote today, as she's received death threats.

D’av has stayed in Old Town to help free Alvis, and while doing so he spots Khlyen.

In the Ancestral Hall of the Nine, Johnny attempts to hand Pawter's note to Seyah Simms, but she coldly responds that she has no daughter. Meanwhile, Dutch spots someone carrying what she recognizes as the Genetic Bomb recovered from Leith a few weeks ago. She and Johnny chase the guy down, but the weapon gets loose, and Delle Seyah purposefully sets it off. Seemingly half the delegation at the assembly hall is vaporized instantly. Johnny chases down Delle Seyah, who tells him that it was Khlyen who insisted Dutch be on hand for this. She assumed Dutch and Johnny were in on it. She also alludes to what's coming to Old Town that night. Dutch chases down the bomber, who recognizes her as Khlyen's protégée. They fight and he starts choking her out, and even when she stabs him in the eye, he's undeterred … because he's Level 6. Johnny arrives just in time to stop him and Dutch kills the agent.

Aboard Lucy and heading home, Dutch and Johnny learn that the Westerley resistance is being blamed for the assassinations on Qresh in supposed retaliation for Alvis' sentencing, giving the Company cover to rescind the Westerlyn immigration promise and crack down on Old Town, sending bombers to pummel the city.

Dutch and Johnny get to Old Town just in time for the air raid sirens. They usher as many people as they can, including Pawter and Pree, into the tunnels.

Khlyen and D'av fight, but Khlyen clearly has the upper hand. Khlyen tells D'av he's got something else planned for him and knocks him unconscious.

Dutch and Alvis, each leading a group of people, meet in the tunnels. Alvis is headed towards the bunkers. Dutch and Johnny are headed to Lucy to get off Westerley. Pawter decides to stay with Alvis in the bunkers, since the rebels will need a doctor. She asks John about her mother, and he lies to her that she said nice things. Pawter knows it's a lie, but she appreciated it.

Dutch and company next run into Hills, who tries to detain them. Dutch unloads on him for framing Alvis and giving the company an excuse to bomb, though she soon realizes it was Hills who pulled the air raid alarm, giving people the chance to escape. He decides to let them go.

They get to Lucy but D'av isn't there. John convinces Dutch that they need to go and trust that D'av will be okay.

Alvis and Pawter and company get inside the bunker just in time.

D'av wakes up in what appears to be a secret RAC Level 6 facility. Fancy Lee is in a bed next to him, seemingly being experimented on, likely being turned into a Level 6 being, possibly against his will. D'av manages to briefly escape, and in doing so realizes that he's in the Red 17 facility on Arkyn. 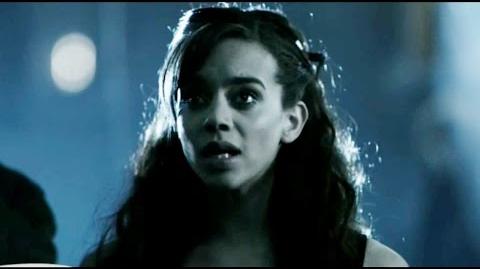