He is portrayed by actor Aaron Ashmore.

Johnny is a member of Team Awesome Force[1], one of the top teams of bounty hunters in the Quad.

John is dyslexic, resulting in a learning disability, and was labeled as “stupid” all of his life. He is not. Decisively. Give this man any mech, any tech, and he can fix-it-build-it-fly it. Just don’t ask him to read the instructions. Or to believe that he’s actually intelligent. Ok yeah, John has some self-esteem issues but one thing he's completely sure of is his devotion to his fellow teammates. [2]

John Andras Jaqobis grew up on Telen with his older brother, D'avin Jaqobis.[3] When John was younger he had a fairly close relationship with his brother. As kids they went skating together at Kipsee.[4] On one of their trips a kid named Randy, who used to steal their skates, fell through the ice and D'avin jumped into rescue him. Johnny describes it as "the longest five minutes of my life, waiting for you to come back."

At some point when they were kids D'avin stole one of John's favorite comics to trade, but told him he lost it. Johnny "never forgave him for that."[5]

An old family joke shared among the Jaqobis is that there are "space rats." A tactic the Jaqobis father used to try to scare his kids out of leaving. In John's particular case, it was to keep him out of the junk yard.[6]

According to D'avin, their father always said that John was the smart one. He wanted to attend college but was unable to afford it after his brother left to join the Nova Cadets.[7] He got stuck dealing with the "crap of mom and dad."

Their mother died three years before the pilot episode (Bangarang) from an illness known as quinsy.[8]

Johnny was a thief and was caught by Dutch six years prior to the start of the series trying to steal her ship, Lucy, which is how they met. Dutch got John into being a Killjoy and they've been together ever since.[9] They also provide security at The Royale, a bar in Old Town, for free drinks.

Dutch and Johnny, later joined by D'avin Jaqobis, have served many warrants together. They went after Coren Jeers, a criminal boss hiding out in the Badlands of Westerley, on a Level 1 Warrant. They captured Gush on his ship, the Monsoon, and retrieved the cargo he had stolen.[10] The team rescued a young woman who was pregnant with the heir to Land Lahani of The Nine and returned her and the newborn baby to Qresh.[11] They went undercover at a Hokkery to retrieve Vincent Sh'ao, a migrant worker and Jakk grower, from Leith before his work visa expired.[12] As a top Killjoy team in the Quad, they competed in a Black Warrant to capture Big Joe, a rogue Killjoy wanted for attacking Company ships and stealing their cargo.[13]

When Johnny realizes that a Level 5 Warrant has been taken out on his brother D'avin, he accepts the warrant in Dutch's name and travels to the Slaver Ship Arcturus to get him. Dutch finds out about it and helps Johnny in order to keep him from being disciplined by the RAC.[14] D'avin helps Dutch and Johnny complete a Hostage Exchange Warrant to retrieve the daughter of a mayor from a gang lord in Sugar Point. After that mission D'avin becomes a Killjoy and a member of the team.[15]

Johnny spends his time acting as an intermediary between Dutch and D'avin, trying to build cohesiveness since the change when D'avin became part of the team. Johhny's relationship with his brother and the secrets of D'avin's military service and Dutch's past constantly pull the team apart. Johnny is upset when D'avin passes his RAC Agent test as a Level 4 agent when he has only reached Level 3. Dutch reassures Johnny that he is irreplaceable and that "D'avin's Level 4 is nothing compared to the six years they have spent as Killjoys together."[16] Even after D'avin attacks Dutch and stabs him, as a result of the mind control experimentation he was subjected to as part of a military experiment, Johnny doesn't give up on the team. While he's recuperating from the stabbing, he arranges a Warrant for Dutch and D'avin with Bellus Haardy in order to get them to talk and work out their issues so they can be a team again.[17]

Alvis Akari points out to Johnny that he is always trying to fix things and people, and this is true. Johnny goes to great lengths to help people. He is dedicated to Dutch and will help her find and deal with Khlyen no matter what is needed. He helps D'avin find Dr. Pim Jaegar in order to help heal D'avin of his Stress Response Syndrome. He also helps Pawter Simms with her Jakk addiction[18] and tries to help her reestablish her relationship with her mother, Seyah Simms.[19]

Throughout their adventures in the Quad, the team continues to be pulled into the conspiracy of the Company, the Nine, and the RAC. As the events of the coup unfold, Johnny is forced to leave Old Town with Dutch before the city is bombed, without knowing where D'avin is but knowing that he has been taken by Khlyen.[20]

Dutch and Johnny are able to track D'avin to Arkyn and the Red 17 program, and are able to rescue him before he is turned into a Level 6 agent.[21]

After the bombing of Old Town and subsequent installation of a Containment Fence around its perimeter,[22] Johnny helped Pawter investigate the Company plan for Old Town and the technology installed at the Spring Hill Compound.[23][24] She and Johnny fell in love and got married while covertly fighting the Company. Pawter was stabbed to death by Delle Seyah Kendry while negotiating an accord for the freedom of Westerley from the Company.[25]

John is tall with short dark blonde hair. He is athletic with light blue eyes and fair skin. John has a light stubble across his chin and upper lip.

John and Dutch's relationship is very sibling-like. They first met John attempted to take the ship, Lucy, and Dutch threatened to shoot him in his crotch. There's a bit of animosity from John when he finds out Dutch slept with his brother D'avin.

They are brothers, though when they are reunited their relationship was non-existent. They hadn't seen each other in eight years and in the mean-time, life passed by, including the death of their mother which D'avin did not know about until John told him. [26] Over time they began to rebuild their relationship. 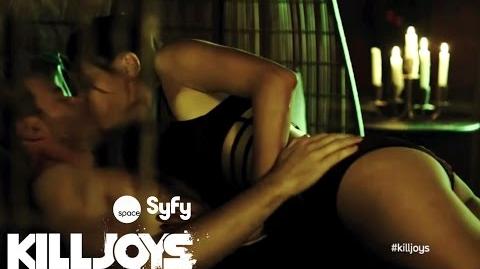 Retrieved from "https://killjoys.fandom.com/wiki/John_Jaqobis?oldid=22219"
Community content is available under CC-BY-SA unless otherwise noted.