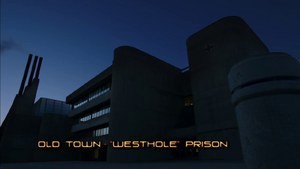 Westhole Prison is located in Old Town on Westerley. It is a penitentiary used to punish criminals, political dissidents, and other enemies of the Company. [1]

Individuals can be sentenced to both short and long term incarceration, service working the Company mines, and execution. One of the ways prisoners are executed is by staking them out in the streets of Old Town during the Black Rain storms, where they are dissolved alive by the toxic rain.[2]

The Company keeps their most dangerous political prisoners in the Blue Unit of the prison.[3]

The prison facility does not seem to be totally secure as several prisoners have escaped at different times.

After the bombing of Old Town, a Company ship was shot down and crashed into the prison, breaching the Blue Unit and enabling two prisoners to escape. A prison guard initiated the Aridity Solution within the prison, killing the prisoners that had not yet escaped.[4]